Located in the far north of Sweden at a latitude of 68 degrees, Abisko is arguably the best spot for aurora viewing in all of Europe. But it is less popular than Iceland or Tromsø, Norway. While I wouldn’t call it cheap, Sweden is certainly less expensive than the aforementioned countries. There are never any guarantees, but the microclimate around Abisko gives a higher likelihood of clear skies than other places in Scandinavia.

I had a chance to visit in March of 2019. Of the 6 nights I spent there, it was clear enough to see the aurora on 4 of those nights. Even when the KP index was only 1, the lights were still very active. I’m writing this article for others who may want to plan a visit to this special place.

Considering how far north it is, Abisko is surprisingly accessible. The nearest larger city is Kiruna, with a population of 18,000. The airport there is served by Norwegian and SAS airlines with 3 flights daily to and from Stockholm. Narvik, Norway, has an airport as well, although it’s a bit farther from town. Taking an overnight train from Stockholm to Abisko is also an option. I was surprised by how inexpensive the tickets were for a sleeper car, starting at 800 SEK. There was not a lot of space though. The train is rather slow and I’ve heard delays are common. But it still may be worth it to some people for the experience. There is a train station in Abisko and the line goes all the way to Narvik, Norway. Taking a bus or booking a transfer between Kiruna and Abisko is also an option. Public transportation may be all you need. But if you want greater flexibility in getting around, car rentals are available as well at the Kiruna airport. I found that while the roads were icy, they weren’t that difficult to drive because cars are required to have studded tires in the winter.

STF Abisko Turiststation offers a wide range of lodging. Hotel rooms, cabins, a hostel, and a campground are all available. If you are staying for more than 4 nights or so, then it is worthwhile to become a member of the Swedish Tourist Association since the discounts will pay for itself. As a budget traveler I chose to stay at the hostel. It was fun meeting travelers from all over the world who were here for the same reason. Within the national park there are also a number of wilderness cabins which can be hiked to in the summer or reached by skiing or snowshoeing in the winter. Staying a night at the rustic Abiskojaure cabin after a 15 km trek into the wilderness was a big highlight of my trip. Abisko Östra a couple kilometers to the east has a few hotels/hostels as well. If you plan to ski, you may want to consider staying in nearby Björkliden or Riksgransen, but they are a bit pricier. The larger nearby cities of Kiruna and Narvik, Norway, offer additional accommodations, including AirBnB’s. If you plan to stay at an AirBnB, sign up through this link for up to $55 off your first trip.

Here aurora season starts as early as August 29th when the northern lights may become visible through the twilight. But the sky does not start getting completely dark until September 14th. Between December 6th and January 7th the sun does not rise at all. The season starts to draw to a close on March 31st when the sky no longer gets completely dark. But the aurora may be visible through the twilight into early April. Between May 25th and July 19th the sun does not set.

Abisko has the driest climate in Sweden, with an average annual precipitation of 344mm (13.5 inches). The surrounding mountains create a rain shadow effect, which often brings clear skies even while surrounding areas are cloudy. Fall tends to be cloudier than the spring, and December is the stormiest month. This is the Arctic so expect cold temperatures during aurora season. Early fall is milder, and less likely to have snow. The greatest snow depth is most likely in March with an average of 55cm (22 inches). The coldest temperatures usually occur in February.

It’s possible to step right outside where you’re staying and immediately see the aurora. Abisko is so remote that light pollution is not much of an issue. There are wooded hills covered with short birch trees. A short walk will take you down to Torneträsk, which is the 6th largest lake in Sweden. If the aurora moves to the western sky, then you can capture it above the mountain Nuolja, which replicates this webcam view. Also close to the STF Turist Station is the Abisko River and Canyon with waterfalls. Be sure to familiarize yourself with the trails during the day first, as there are dangerous cliffs. The Aurora Sky Station sits at 1,000 meters near the top of Nuolja and can be reached by a 35-minute ride on a chairlift. The location provides awesome photo opportunities but is expensive. Another great spot is the “Aurora Viewpoint” in Björkliden. That is a short walk from the Sportshop and there is even a small heated cabin to warm up in. If you want to get the most scenic pictures, trek into the Scandinavian Mountains of Abisko National Park via the Kungsleden Trail. If you are hardcore you can wild camp, otherwise stay at one of the wilderness cabins. The fall hiking season is very short, but the Kungsleden is also popular for ski touring in the late winter.

Since the aurora is only visible at night, it’s good to have other activities planned during the day. And in case the weather is cloudy, it’s good to have backup plans. The great thing about Abisko is there is no shortage of activities to choose from. In the fall you can hike, cave, fish, watch wildlife, or tour a Sámi camp. In the winter explore the trails by Nordic skis, snowshoes, snowmobile, or dog sled. Also try ice climbing, or downhill skiing at the nearby Riksgransen or Björkliden ski resorts.

If you have limited packing space, the Abisko Turiststation does rent out tents, winter clothing, skis, snowshoes, and other gear. But there are still certain items you will want to bring. 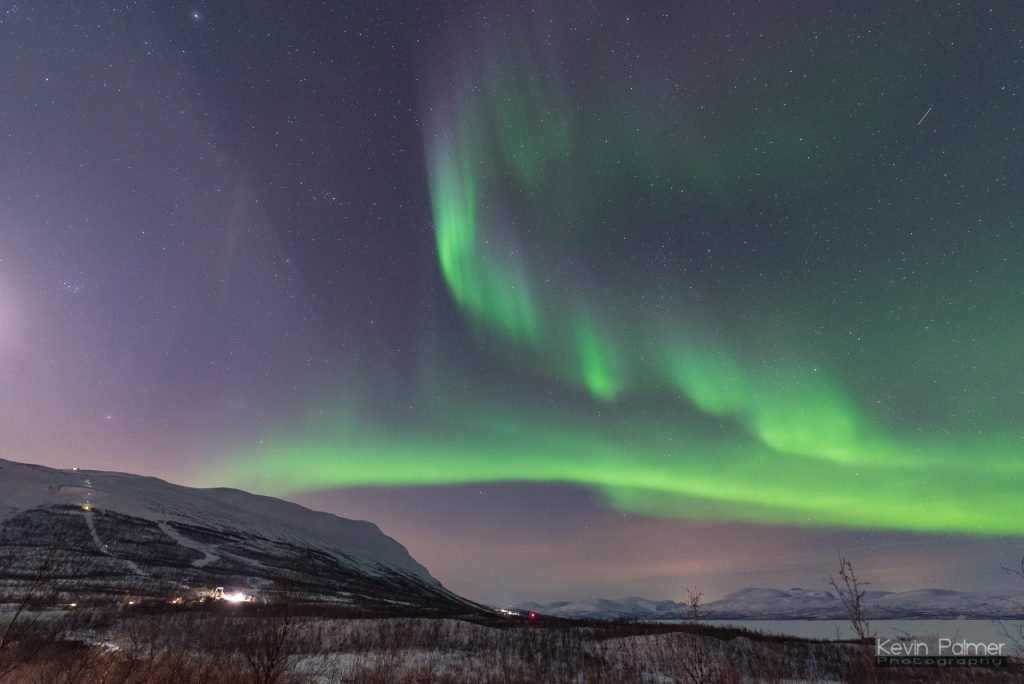 A Few Other Notes

If you have never seen the aurora before, don’t know how to photograph the northern lights, or you simply don’t want to go out by yourself, then booking a tour is a great option. Some tours will bring you to areas you may never see otherwise. And others even let your borrow camera equipment. Below is a list of tours in the area.

Guide to Seeing the Aurora in Sweden

10 Best Places in the World To See the Aurora